What they don’t tell you about cancer

Sharon Morrison was 48 when she was diagnosed with breast cancer. Finding the literature on the subject ‘scary and heavy going’, she wrote a book of her own, based on her experiences. Here, she describes some of the things she didn’t expect — and explains how to deal with them. 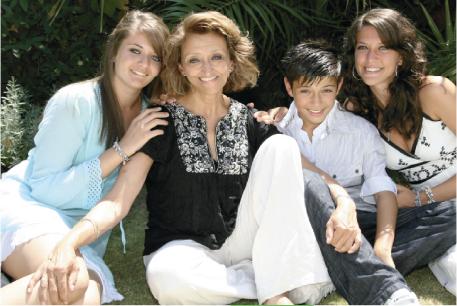 The Pope’s not a Catholic, the world’s not round, Scrooge wasn’t a miser and this definitely wasn’t a lump in my breast.

One night in bed as my hand brushed my right breast I felt something hard. I kept prodding and pushing it. It didn’t hurt, but it didn’t disperse either. So I tried again the following night and the next one.

I dithered for two weeks before making an appointment with my doctor, who immediately referred me to Fiona McNeill, a surgeon specialising in breast cancer who was to be my consultant. She immediately ordered tests and a day later summoned me to see her. I was so anxious about what she was going to say that I didn’t hear anything until: “…and we’ll need to fix a date for the operation. Can you do this week?”

“I haven’t got cancer have I?” I heard myself say, and even after all the weeks of worrying the news still had the power to take my breath away.
“Yes, you have cancer.”
“Am I going to die?”
“Of course not, but we must remove the lump. How does the end of the week sound?”

I am going to die.
I started crying there and then and didn’t stop until I was nearly home. Thinking you are going to die when you’ve been diagnosed with cancer is perfectly normal. But of course most of us don’t die and in the case of breast cancer, death rates have fallen by 21 per cent over the past ten years.

I know I should have fired many questions at Fiona as she told me my treatment post-operation would most likely consist of chemotherapy, then radiotherapy and Tamoxifen tablets, but I couldn’t take it all in.

For the benefit of any of you about to enter this maelstrom, or if you have friends or relatives who are, here are the questions I suggest you ask, because they are the ones I wished I’d asked at the time:
1. How can I be certain I’m not going to die before you operate?
2. What are the chances the cancer has spread?
3. Have we caught it early?
4. What if I don’t want chemotherapy?
5. How many grades of cancer are there and what difference does the grade make to my treatment and recovery?
6. How likely is it that my cancer will affect the future health of my children? What about my sisters?
7. What will my breast look like after the operation, and if my breasts look different can another operation make them look the same?
8. What can I do to avoid a recurrence?
9.What is Tamoxifen?
10. What’s an oncologist?

Once in hospital I was reassured about the simplicity of the lumpectomy I was about to have ans, what seemed like seconds after getting the anaesthetic, I was opening my eyes to the news that the operation had gone very well. The tumour and surrounding tissue had been removed along with 19 lymph glands from my armpit.

I felt remarkably well but I was soon aware I was not alone in my bed. A warm plastic bag was nestling by my right hip and when I looked I saw it was filled with blood.

“What’s this?” I asked a passing nurse. “It’s a drain”, she replied, matter-of-factly. “It collects the excess fluid that’s a result of your operation.”

For me, the most worrying thing was finding out that the drain was sewn into my body. During my time in hospital, it would need to be changed by a nurse once a day. It wasn’t cumbersome, just tricky when having a shower or going to the loo. For me the simplest solution was to hold it between my teeth so it didn’t pull on my side.

Four days later Fiona delivered more good news–the cancer hadn’t spread, the area around the tumour and the lymph nodes were clear. And yet, she said, because of my age (48), the size of my tumour (three centimetres) and the grade (three), chemotherapy was strongly advised.

There are, I learned, a whole host of chemotherapy drugs, prescribed according to the patient’s particular needs. What I hadn’t realised was that you can question the drugs you are offered. I asked a friend who specialises in pharmaceuticals to check on mine and was reassured that I was getting the best. If I hadn’t been I’d have kicked up an enormous fuss irrespective of whether I was a private or an NHS patient.

Since I had medical insurance through my work, I wasn’t surprised that I could have chemotherapy in a private room, but I was amazed to discover I could have it at home, thanks to a wonderful organisation called Healthcare at Home. Home treatment is often available on the NHS too, but you may have to ask your oncologist to look into this as it may not be something they routinely offer. Otherwise, you will have to travel to hospital for sessions and may be one of several patients having the treatment at the same time in the same room. For some people this is a real help as you can chat, exchange views and even have a laugh with other sufferers.

For me, having treatment at home felt more relaxed and comfortable. Most importantly my children could see chemotherapy in action and have some of their fears alleviated.

Everyone knows you’re likely to lose your hair during chemotherapy–usually two to three weeks after the first treatment. And that means your eyebrows and eyelashes too.

But it’s the missing information thats’s frightening because you don’t know you need it until it’s too late. The kind of situations I’m talking about are truly awkward and sensitive, yet crucial help and practical guidance for dealing with them just don’t exist.

Like the diarrhoea. Out and about just after my third chemotherapy session, I felt the most extraordinary sensation in my stomach and bowels. I started to picture myself, a smart businesswoman, briefcase in hand, leaving a trail of excrement like a human snail. Somehow I got to a public loo, taking the tiniest steps I could and sorted myself out, but how I made the buttock-clenching train journey home I’ll never know.

I confided in my sister Merlyn who put together an emergency kit for me– scented nappy sacks, sanitary towels, wet wipes, spare knickers and Imodium Instants–and I never left home without them.

Another of my side effects also came from left field. My fingernails and toenails started flaking off. I couldn’t put on a jumper without one of my fingernails catching and had to endure the painful pressure of shoe-leather on nail-less toes.

Losing my sense of taste also hit me hard. I love a glass of dry white wine or three, but now I could only tolerate sweet white wine or apple juice. Everything else tasted awful. The same went for food. I wanted sweet things and nursery food like fish fingers. When I developed mouth and throat ulcers, which made it hard to speak clearly or swallow painlessly, my life was complete.

I still watched what I ate and still exercised, but none of it prevented me putting on weight, caused I believe by the onset of menopause which is triggered by chemotherapy.

And although I was doing the exercises the physiotherapist had prescribed for my arms, stretching out my right arm soon became increasingly painful. I also noticed a strange bony line forming under my right armpit and running down to my hand. Assuming I’d been doing the exercises incorrectly, I went back to the physio. “Ah,” she said. “You need to be pinged off. The lymphatic vessel in your arm has hardened and is pulling. It’s called cording.”
“Does it hurt?”
“Try to relax,” she said, as she pulled my elbow towards my head with all her might. It really hurt. But on her second attempt I felt a ping and the tightness and pain went.

I’d been told that my breast could become swollen with fluid because I’d had my drain removed early so I could return to work. And it did, reaching and even surpassing Jordan proportions. I actually thought my breast might explode and had to go three times to hospital to have it drained with a syringe.

But, by the end of my treatment all the signs were good. Sadly,I’d put on about a stone and my knees and feet sometimes throbbed as though I’d climbed K2 in flip-flops. Gradually though, my sleep improved and a luxuriant head of short, bouncy, wayward curls began to reappear.

Four years have passed since I was first diagnosed and the one thing I’m certain of is that attitude is contagious–so it’s better all round if you have the right one. I found that I could use my imagination to diminish my cancer rather than allowing the disease to control my life. I wanted to make light of it too, treat it like the massive inconvenience it was.And it helped.

If you have cancer the last thing you need is even more fear piled on you, so my book is a response to all those well-meaning scaremongery ones–a guide dedicated to helping family, relatives and employers understand what is happening to someone they love, like or work with, what to expect and how to help. 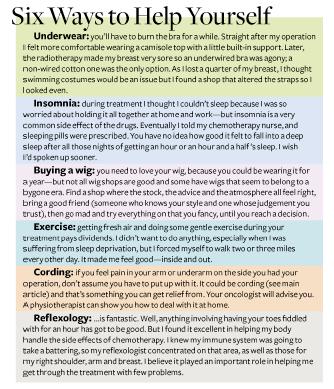 Sharon Morrison’s book which is entitled ‘Even the Eyebrows?’, is available from amazon.co.uk and from her new website which appropriately bears the name of her book.

I hate to say I have yet to read the book, but I certainly hope to in the near future.

This article appeared in the September 2009 issue of Reader’s Digest and I would like to extend my heartfelt thanks to both Sharon Morrison and Hazel Gilbertson, the PA to the Editor-in-Chief, Reader’s Digest in the UK for granting me permission to reprint it here. The article can also be read here.

This entry was posted in Breast Cancer and tagged 'Even The Eyebrows?', Breast Cancer, Hazel Gilbertson, Reader's Digest, Sharon Morrison. Bookmark the permalink.

2 Responses to What they don’t tell you about cancer